Goldson selected as 2019-2020 District Teacher of the Year 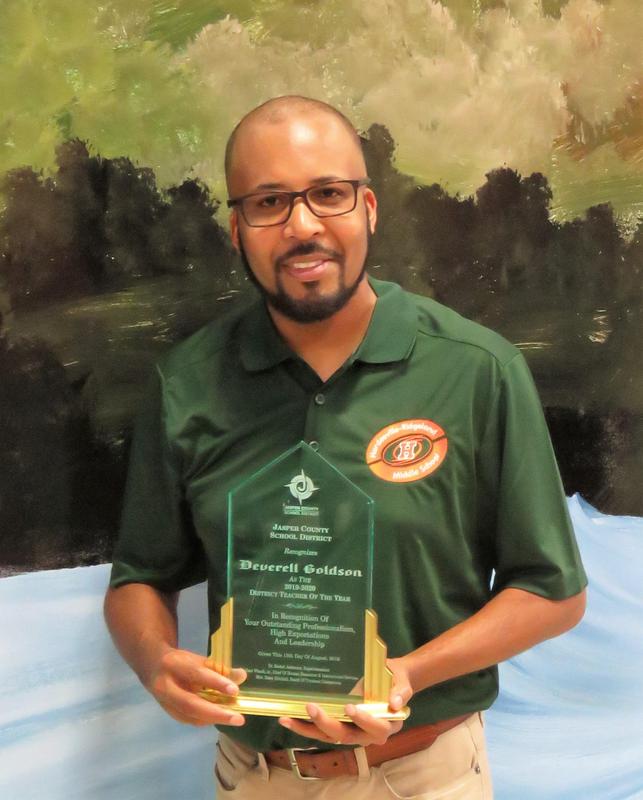 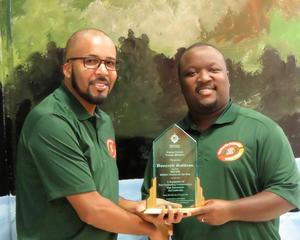 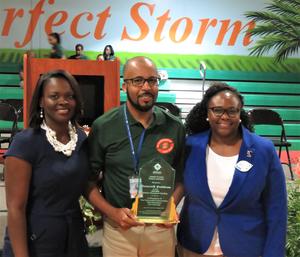 The announcement was made at the district’s Convocation by South Carolina’s State Teacher of the Year Ms. Chandra Jefferson of Fairfield County Schools. Goldson was selected as the district’s overall winner, from a competitive selection of candidates from each school.

Goldson is a 7th Grade English-Language Arts (ELA) Teacher, in which he also serves as the 7th Grade Team Leader. Goldson holds a Masters degree in Education from Troy University. He has been with the district for three years, with a total of 23 years in education. He has a Bachelor of Arts in Guidance and Counseling from the Institute for Theological and Leadership Development.

Growing up in his home country, Jamaica, Goldson always heard that teaching was quite a noble profession. And thus, from a very tender age, he gravitated towards this great calling. Goldson absolutely loves what he does. He stated, “there is no greater joy than seeing the light in a child’s eyes when he learns a concept. This moment is a priceless moment which gives great fulfillment to me as a teacher. Seeing children transform right before my very eyes provide a high degree of motivation in this noble career.”

Always striving for excellence has afforded Goldson to receive many professional accolades throughout his years of service as an educator. Of course, he was named 2019-2020 Teacher of the Year for Hardeeville-Ridgeland Middle School.  He also received the following recognitions:

Goldson mentioned that he was drawn to South Carolina on two separate occasions, in which he passed through Jasper County both times. Shortly after passing through the county, he was told by a friend that Jasper County was seeking an ELA teacher.  He reviewed the school district’s web site and researched the community. Goldson shared that “Instantly, he felt that this is a place where he could have a great impact and make a significant difference!  Jasper County is a place where he was meant to be!”

He enjoys teaching at Hardeeville-Ridgeland Middle School because education is taken seriously at HRMS. Goldson said, “HRMS has a “Student-Centered…Future-Focused” environment. Best practices and current trends in education are highly promoted and incorporated.”

“Mr. Goldson is the epitome of excellence with caring, and he is truly an asset to our HRMS family,” HRMS Principal, Mr. Eugene Bellamy Jr., said, “His belief in students’ abilities and potential is reflected in the care that he shows his students on a daily basis. He models excellence in his efforts to help students begin taking steps in the right direction and embrace that they are destined and purposed for greatness. We are extremely excited that Mr. Goldson has been honored as the JCSD 2019-2020 Teacher of the Year, and we know that he will serve and represent JCSD well!”

Goldson is married to Sabrina, and to their union, they have two children Jaron and Joelle. Goldson enjoys singing, watching documentaries, traveling, and meeting new people.

Goldson’s philosophy of teaching and learning is “Life without learning is death.” He strongly believes that knowledge is power, and each day provides a new opportunity to harness a new experience, and hence, to learn something new. He considers himself a lifelong learner and therefore believes that if students have the tools for learning, then it provides empowerment which will help them to aspire for greatness.